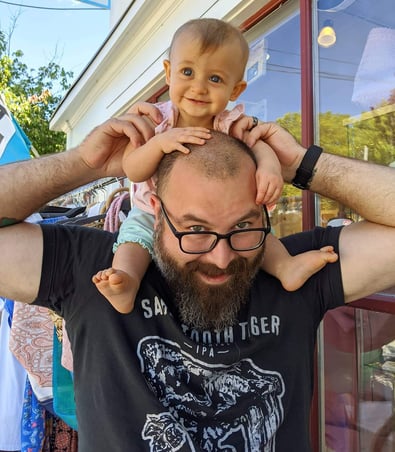 We're pleased to feature Brendan Van Voris in Flexible Pack's very first Employee Spotlight. During the interview we had the opportunity to hear all about Brendan's baby daughter, Luna.

Tell Us About Yourself

Brendan shared that he was born in Massachusetts and lived in Mattapoisett until age 17. He then left home and lived in England, Wales and Ontario, Canada. Brendan also lived outside of Dallas before moving back to Massachusetts. He said he moved around for school, work opportunities, and ultimately, family. He has a master's degree in English Literature and was a teacher for 10 years before realizing his passion for sales in the beer industry.

How Has Flexible Pack Changed Since Joining the Company?

Brendan considers himself fairly well known throughout the craft brewery community in New England. He shared that with his influence, Flexible Pack moved more toward the beer industry than perhaps the company thought was the projected path. He said the Company has grown significantly since becoming a part of it in May 2019. It's important to note here that while Brendan's specialty may be in beer, he is a key player for the other industries Flexible Pack serves, including CBD, personal care and food and beverage. Other areas of focus for Brendan include lead qualification, providing quotes to customers and outside business development.

What Excites You About the Work You Do?

Brendan said, "Honestly, I love this work". He is a self-proclaimed hustler. What excites him about what he does, is that it encompasses a bit of hustle, some creativity and project management. Brendan enjoys solving problems for customers and gets satisfaction by making their lives easier, "it's super rewarding", he said.

What Is Your Proudest Moment at Flexible Pack?

He said it was the first time a prospective customer placed an order for over 100,000 pieces. Brendan's coworkers asked him, "Is this a typo"? It turns out that this particular customer is a huge national brand so we see how Brendan could feel so proud of that sizeable first order!

What Does A Typical Day Look Like For You?

Brendan spends his time utilizing the CRM, overseeing order statuses, adjusting pricing, working with the Design Team and corresponding with customers. Despite the pandemic, Brendan is still prospecting despite not physically visiting breweries. Today, he's utilizing the tools from a recent Company sales training to focus on highly effective cold calling.

What Do You Enjoy Doing Outside of Work?

Brendan said he and his wife, Tricia, enjoy cooking but confessed that Tricia is the better chef! They have been married for 5 years but have been friends since they met at camp, the summer that Brendan was 9 years old. They have a tight knit group of friends that they see frequently. Since 1994, Brendan has had a passion for Magic the Gathering which is a fantasy collectible card game - he's even attended regional championships!  Today Brendan focuses on spending time with Tricia and Luna.

What Is Your Personal Mantra?

"Done is good but done right is better"! 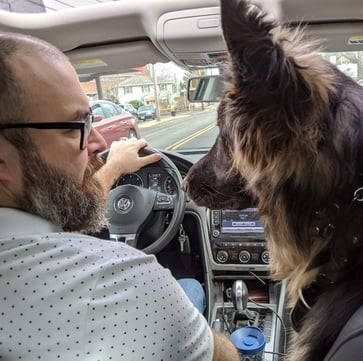 It was great to get to know Brendan a little bit better both professionally and personally. It was very clear that he is enthusiastic about both areas of his life and we were appreciative to spend the time with him.  Interestingly, the week of this interview we received a very complimentary testimonial from a brewery customer, Proclamation Ale who provided really positive feedback about Flexible Pack and Brendan's work. Way to go Brendan!

A flexible package enhances your brand – and sells product.